womenforfootball.com – It was truly a great day to work at the hub of Financial District on Friday May 31st. As I was gazing through incoming Outlook emails in the office, one of the emails stood out; “Canadian women football players at the lobby!”. I could not believe my eyes. So I read through the email, and it even indicated a time limit of 1 hour that most of Canadian women football(Soccer) National team players, will be at First Canadian Centre lobby.

As you may know by now, BMO, Bank of Montreal, is Canadian Soccer Sponsor; Hence the name of ‘BMO Field” for Toronto FC and Canada NT Stadium.

So I rushed down the elevator and as I got to the lobby, I was stunned by the reception of fans; There were over 100 people, including teenage girls and many women and soccer dads, were lining up with the Canada Women team poster to get the players’ autograph. It was truly an inspiring scene to witness. To those who think, soccer is not among top followed sport in Canada (Ok I know it is not as much as Hockey), and that women national team is not too popular yet among soccer fans, this was a day to remember.

So I waited and waited in the line-up; Every two players were sitting at a table, with BMO poster in the background, and they were signing autographs. There was even a sign that “taking photograph is prohibited”  but people just did not care. They were taking lots of pictures with each of the players; it shows, thanks to their great quality games, how much  inspiration these players have marked in each of teenage girls’ lives. I greeted each of the players, mentioned my honest comment that “I’m proud of them” and praised their great consistency, and took picture with them. Here are few pictures of their day at the hub of Financial District, First Canadian Place. 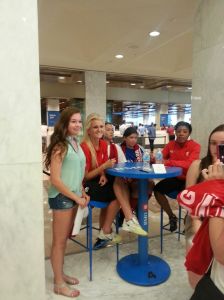 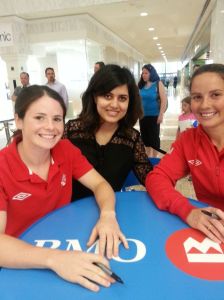 At the end of the day, football(soccer) fans and people whom so passionately welcomed Canada women football national team, proved pundits that it is just a beginning of a new era of football enthusiasm in Canada.