Womenforfootball.com – “Like a good wine, we get better with age”; This is a common belief among many people, and strongly believed among professional football club management. Therefore, it has always been a norm among football community to bring an experienced and middle-aged coach to the team, and path to success would be assumed as guaranteed. Although this is more than a mere myth, and in a lot of cases a middle-aged coach’s many years of experience does lead to club’s success, but there is no direct correlation with the success rate. And reversely, letting young coach take charge of the team, does not necessarily end up in failure or high risk.

In fact, opposite were proven true, when for instance France Ligue 1 club,  Monaco bet on- back then 34 years old- Didier Deschamp to take on the team with no previous coaching experience but with many years of playing experience with France National team and different European club teams; It turns out, in his 3rd season in charge, he won French League Cup trophy and later leading the team to their first ever Champions League Final. Other success stories of teams with young managers are Borussia Dortmund’s Jurgen Klopp, Chelsea’s Roberto Di Matteo, and of course the legendary but young manager of Barcelona and Bayern Munich’s Pep Guardiola.

So in this research article, I have gathered all coaches’ ages working in any of the clubs at top 5 European leagues(Germany’s Bundesliga, Italy’s Serie-A, France’s Ligue 1, Spain’s La Liga and English Premier League) from season 2011 and onward, including the upcoming season 2013-2014. Also I recorded team managers’ ages during 2003-2004 season to make a 10-year comparison as well.

The age range format is shown below:

-Group B: 50 to 69 years of age. We can call them “middle-aged/experienced coaches”. 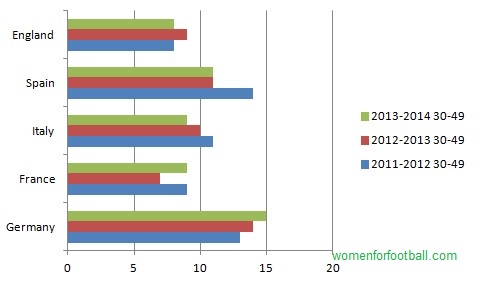 Chart: Young coaches from 2011 and onward. 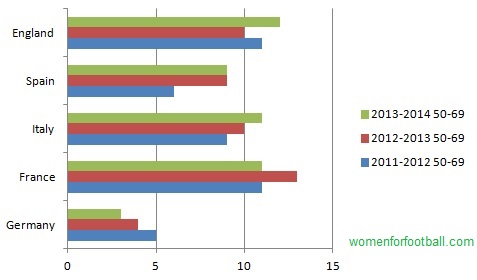 Now that all club teams have secured their managers for upcoming season, lets look at the findings from 2011-onward: 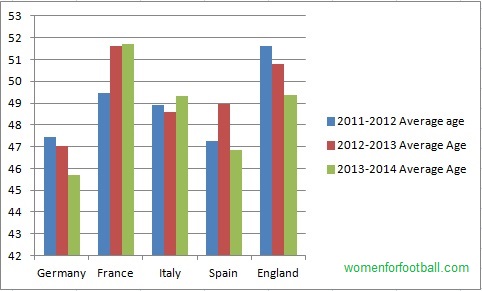 Comparing two seasons in span of 10 years, percentage of 30-49 years old coaches in charge of teams among top 5 leagues have increased by %4.          As expected, employing young coaches came at the expense of middle-aged coaches; The percentage of employed coaches aged 50-69 declined by the same 4% in the same time period.

At the end, the findings and the trend analysis is consistent with the assumption that considering the successful reigns of young coaches, such as Guardiola, Kloppe, Deschamp, Conte, among examples, Top 5 leagues are becoming increasingly invested/more trustful towards coaches between age of 30-49, hence breaking the previous myth of “fine wine and old age”, at least amongst coaches!