womenforfootball.com – As I write this piece, it has been just an hour since Summer transfer window in 2013-2014 finally closed.

It was an usual roller-coaster ride for football fans, pundits and reporters. Some teams like Bayern Munich, with their new coach Pep Guardiola, as well as Barcelona initiated their bidding from day one to form a cohesive team ahead of season kick-off.

Other teams, albeit at the cost of an inflated market, left it to last seconds of transfer window deadline, which was today; teams like Manchester United, Tottenham, Real Madrid and Arsenal.

So as the dusts are settled down, lets look at Top 20 transfers of Summer 2013(by cost) and other charts worth paying attention to:

Next chart worth looking at is Top 10 clubs that spent the most throughout Summer 2013: 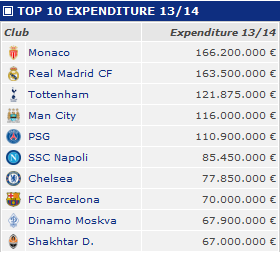 Another chart worth looking at is the expense/revenue ratio of leagues in transfer market Summer 2013:

Top 10 transfer of leagues by revenue-expense

Another chart to look at is transfer flow of players from one league to another league:

Last but not least is the chart on World Record transfers of all seasons, including Summer 2013:

Transfer record of all seasons

Here are all the charts of Summer transfer 2013 that were worth discussing.  So lets wait and watch how the 24 years old Welshman, Gareth Bale fares at Real Madrid.  Will he remain consistent and as influential in his team’s results, as he was during his tenure at Tottenham? We shall wait and watch.

2013-2014 will surely be an interesting season to observe the games throughout Europe.