Womenforfootball.com – Pep Guardiola, “The genius coach of modern football”, as he is called by majority of football managers, professional players and pundits, is on his way to English Premier League(Source: ESPN). The young Spaniard made the announcement in an official press conference last month, although he still has 4 months remaining into his contract at Bayern Munich.
Criticized by Bayern Munich fans for not repeating the same glories as his predecessor, Guardiola has set his eyes on the lucrative and competitive English Premier League as his next destination. The question is, which club team will he take reign of?

Reportedly, there is several English Premier League clubs competing for his contract signature, but the most serious ones are reportedly Manchester United and Manchester City.

Here we will discuss which Manchester team he will likely join and why? 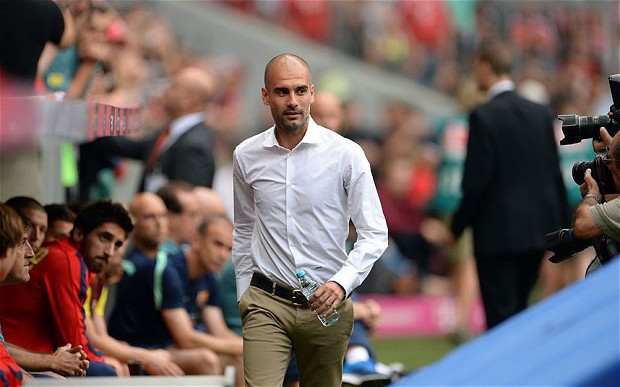 Manchester City: The fifth most valuable club is owned by Abu Dhabi Royal family, yet the manager is given full authority to buy any player he wants, without interference of owners. Since 2013, the team has been coached by Manuel Pellegrini. Over the recent years, Chilean tactician has kept the team in balance by being consistently among the top 4 English teams.

The most notable glory is winning English Premier league title back in 2013-2014. They have also appeared at all Champions League games in recent years; Although they could not go past Round of 16 of Champions League. In 2013-2014, Manchester City were drawn against reigning Champions, Barcelona, which led to their elimination from Competition. And in following season, they were drawn against Pep Guardiola’s Bayern Munich team, which they were outpaced by Bavarians in 2nd leg-match. Currently placed in 3rd spot, 1 point shy of table-leaders, Arsenal, again they have a great chance of qualification to Champions League next season. Definitely, something their Persian Gulf investors see lacking in this team is UEFA Champions League glory, and they are looking for a tactician who has experience of UEFA Champions League glory.

Manchester United: The Red Devils have a different story,as they are perfect example of a team in crisis. Their legendary title-winning manager, Alex Ferguson, retired in 2013 and ever since they have tried out 3 different managers, with millions in new transfers, but the team have yet to see a good day.

In 2013-2014, the first season following their coach’s retirement, they finished 7th in English Premier league, even worse they missed out on Champions League and any other European competition in the following season. In 2014-2015, after splashing out millions for new players under their new manager, they managed to finish 4th in the league and made it to Champions League. As it stands, Manchester United is currently in 5th spot, 7 points off the table leaders. If their games remain as rocky as it is now, they will again miss out on Champions League qualification for next season.

Manchester City has already won English Premier League title and a League Cup in the past 3 years. They have qualified for Champions League games every season, and have been competitive in all their Champions League appearances.Whereas, Manchester United has not won any title since 2013 and have missed out on European Champions League most recently, and may miss out again next season.

The caliber and importance of Manchester United as a famed brand and established club in English football cannot be disputed either. Whereas, in Manchester City’s case, fair or not, any success by the club is associated with their rich owners’ spending-spree, not their history or competitiveness.

To put all into perspective, Pep Guardiola can make his mark more at Manchester United. They need him more desperately at Old Trafford, and he has a unique chance that whatever he achieves under his reign, will outperform his predecessors. Even better, he will be the manager of one of the most well-known football clubs in the World, with immensely royal fan-base. It will be up to Pep Guardiola if he wants to take this challenge, but if he does, it may turn out to be his best managerial chance he has ever faced.