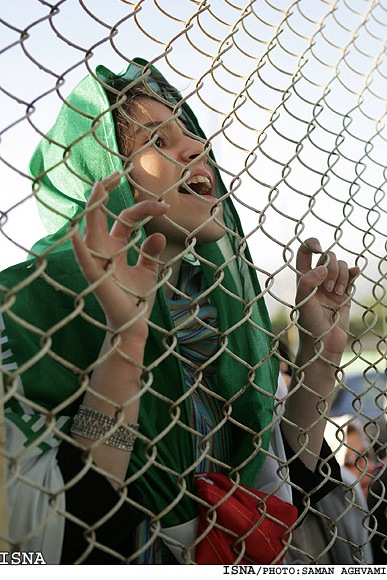 womenforfootball.com- Last we checked it is year 2016, more than a decade into 21st century, and yet in very few countries, women are not allowed to enter stadiums to attend men’s football games. To put it into Canadian perspective, it is as if a Canadian man, father of two, cannot take his daughter to Toronto FC Match or Canada men’s National Soccer team match at BMO field or other football (soccer) arenas in Canada, but can take his son with him. His daughter would be barred from the stadium by entrance gate’s security guards, because of her gender. It is laughable and gruesome at the same time. While we are at it, this girl is not allowed watch the game and support her team with her guy or girlfriends either at a sport bar or café.

There is a caveat though: If Canada men’s National soccer team were to host France National team for example, it would be perfectly fine for French female fans to enter BMO field to attend the game; Infuriating, is it not?!

Well, this is what has been going on for decades in 2 countries in particular amongst 211 football associations.

In Iran, since 1979 revolution, under no circumstances, Iranian women would be allowed to attend men’s football games. Vulgar words used by some football fans, is used as a reason by Iran football officials and politicians to refuse the entry to female football fans.

Despite the fact that:

Iranian female football fans are also banned from watching football at cafés  in Iran, due to fear of “mixing with men” according to Iran officials.

This discriminatory mandate hurts even more, when female fans or reporters of other nationalities can freely attend the games in stadiums in Iran, such as finale of Iran’s Premier League soccer season on May 13, 2016, where security officials let Perspolis’s Croatian coach’s wife and daughter into the stadium for Perspolis and Rah Ahan match, but continued to bar Iranian female fans.  However, that did not prevent eager female football fans from sneaking into the arena. In one instance, a girl whom according to her claim had worn 5 shirts and 5 pants and pretending to be a guy,  sneaked passed suspicious security guards and entered the arena in May 2016. Later, she posted a selfie of herself on Instagram showing her support for one of the teams in the Final.

Both countries’ discriminatory practice is against article three of FIFA, which indicates: “Discrimination of any kind against any Country, private person or group of people on account of race, skin colour, ethnic, national or social origin, gender, language, religion, political opinion or any other opinion, wealth, birth or any other status, sexual orientation or any other reason is strictly prohibited and punishable by suspension or expulsion.”

Iran and Saudi Arabia are practically the only 2 countries amongst 211 FIFA member Associations who practice such ban on their female football fans.

In their neighbouring countries, though women are allowed to enter stadiums, despite their passion for football, there is cultural barriers in the society that views “women’s passion for football as odd and a sign of masculinity of those women”. Therefore, in countries such as Turkey, UAE, Lebanon and Algeria, many female football fans choose to secretly watch football games at home and on TV, rather than attending the games at stadiums.

Here is a chart to visually display the restrictions in such countries:

Whereas, 205 other football associations have no restrictions and complete freedom for female football fans to attend men’s football games. Here is a chart to demonstrate such countries:

One interesting incident happened in Turkey, where due to hooliganism at the match between Fenerbahce and Shakhtar Donetsk. Turkey football officials, as punishment for Fenerbahce’s male fans, ruled to only let women and children into the stadium for the next match. It is a discriminatory practice on its own too, but the stadium was filled with passionate female football fans, of all ages, without any violent incidence.

Here is the video of how 41,000 women and children filled Fenerbahce’s stadium back in 2011.

Until then, the hope is that Iran and Saudi Arabia put an end to their discriminatory and sexist practice against their own countries’ female football fans, and for FIFA to enforce their own standards on their member associations.