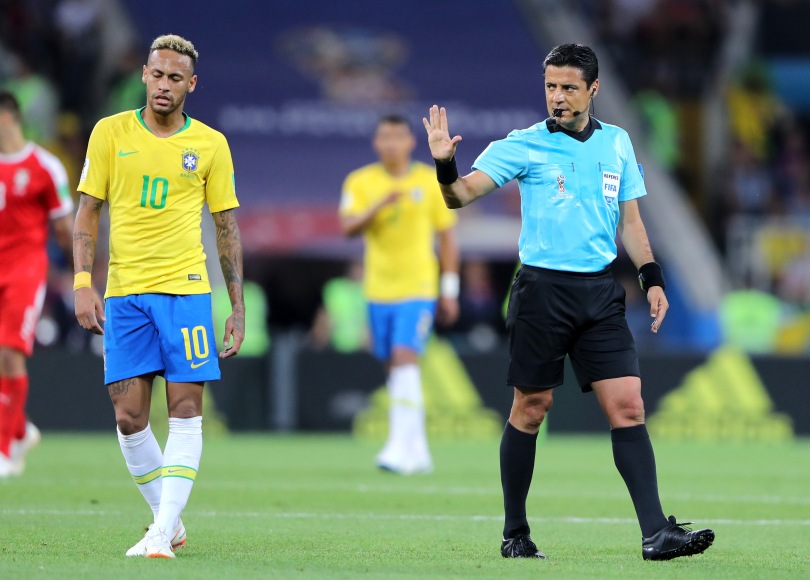 womenforfootball.com – If you think monitoring Junior Neymar, running along Leo Messi, and eyeing Ronaldo’s penalty fouls are easy tasks, just ask Alireza Faghani. The prolific referee, is among top 20 football Referees of world football.12th best referee to be exact, according to International  Federation of Football History (IFFHS). The 42-year old Iranian national, has officiated more than 91 football games. Of which, he is known for officiating 3rd place play-off match of FIFA World Cup 2018 between Belgium and England, Germany-Argentina in the same competition, 2016 Olympic Gold Medal  match between Germany and Brazil, Asian Cup 2015 Final between Australia and South Korea, and in the same year FIFA Club World Cup game between Riverplate and Barcelona. Alireza Faghani has sure seen it all.

And in a sudden move, last year this time, news broke out that Alireza Faghani is leaving Iran Pro League to officiate in Australia’s Top division, A-League. In an exclusive interview with Alireza Faghani, I chatted with Faghani about his move and life in Australia.

Yet, he was so humble. He called himself “student of A-league”. And while he was in 14-day quarantine of local travel within Australia, Alireza Faghani told me about the reason for moving to Australia, rumors of corruption, match-fixing through bribery of referees in Iran Pro league, and what its like to officiate in Australia.

Alireza Faghani:  Well I first thought of moving to Australia when I was there for officiating at Asian Cup 2015. I was there for 40 days. (Faghani officiated The Final of Asian Cup 2015: Australia-South Korea. Quarterfinal and Group games). There were some friends there whom were happy at Australia and told me good things about there. And I liked the environment there.

Then after World Cup 2018, I received my Immigration visa for Australia. The priority for me was my son’s future. Specially that he was close to get his Diploma in Iran. And when school admission of Australia came in for my son, too , that’s when Australia government and Football Federation found out that Im moving with my family, and gave me the offer to officiate in A-League. I had planned to move to Australia with my family, and if I wouldn’t find a position in my own field, I would retire from refereeing. That thankfully I got this offer.

A.F:  I think some of them were even happy that I left! But overall what I hear is that we miss each other. That thankfully, because of Social media, we, with refs in Iran, are all in touch and connected with each other.

A.F:    I was coming here anyways.  I moved and we settled in, and then one day I went to FFA office and the position. I want to thank them from here. I didn’t really have stress of work or finding job. As for working situation,  A-league games have ended last week.  Im currently in self-isolation as I came from officiating to my own city. League kick-off date is not clear yet. As with everywhere else with covid19, it’s a wait and see approach here.So they haven’t set the date yet.

A.F:   I have previously travelled all over the world for officiating. Lifestyle is good here. The downside is being away from my families and missing them. But its definitely better for my children here. They are happy here, that’s the most important thing for me.

A.F:   In A-League they had many derbies.  If you mean with “FC Sydey-Wanderers“  . It was in Bankwest Stadium. Its not small but Unique, in a sense. With fans all around the stadium (Bankwest is a rectangular stadium). There was no controversy, insult or cursing or rumors on social media here. Here the goal of everyone is to see a Good football. Players, opponents and officials hug and leave at the end of the game. There is no fiasco like in Iran league that you see they come to the airport to attack them.

A.F:  Well we had gained experienced to not pay attention to controversies before the game or insults during the match, and just focus on officiating. I remember there were rumors of “Refs were told to make sure Perspolis-Esteghlal tie”. But in those games, in fact there were lots of goals scored. One time Perspolis won 3-2. Some games Esteghlal won, including the last one 3-2, which was interesting in 10 minutes the outcome of the game changed.

A.F:   Personally  you can like a team, but for ref, its different, because even if they like a team, once in the match they officiate as a ref, and neutrally. As a ref, you don’t care. Its interesting, in Iran, they don’t let non-Tehran residents, to officiate in their own city(when Pers or ES have a match in their city for example). But in Australia, to save cost and to avoid moving ref between cities, referees residing in that city can officiate league games of that city. Because for referees it doesn’t make a difference.

A.F:  You cant say it’s a rumor. I never received such contacts/calls/attempts for bribery. But you cant deny corruption in any organization.There was always this rumor. I heard it too but never happened to me. And I haven’t seen it. I know there were several refs that were fined and dismissed at some point because of that.

NM: So among network of refs, you didn’t hear your colleagues saying they got an offer?

A.F : “They(those Refs) never say it to you..” But there is a governing rule in football referring, and also taught here in workshop too, that says “The rule is that if they offer you,( as ref), a bribe, even if you don’t comply, You have to publicly reveal it. Or else you are as much guilty of corruption.”

A.F:  Yes women refs, were not paid, and when they did a strike, in response the league suspended female Refs. For us men referees, they’d pay at half-season. But it was a very very small amount compare to players’ salary. Refs’ pay is even lower than a player’s salary in league division 2. For women refs, the pay was so slim.And they even didn’t pay that and suspended them for protesting. Previously there was a push to have Head of Referee committee in Executive Committee(“Heyat raeese”)  at Iran Football Federation. But it never happened. These are all examples of Football Management that needs to be addressed.

A.F:  well I cant speak about all of them, but from what I hear from them, referee’s payment is still a big issue. Also, they have a concern for suspension and fines by  “Disciplinary committee” after they issue a Red card during a match. Or the attacks referees face during the match. Like the  Assistant referee of League Cup Final (Esteghlal-Teraktur) that was pushed and slapped in face during the match, recently. These needs to be addressed.

A.F:  Australia, Japan and South Korea, have initiated format of hiring football Referees fulltime. For now in Australia there are 3 fulltime refs. So that referees don’t have to worry about other employment income. Back in Iran, I was City of Tehran employee and then Refereeing was my  2nd job. And City was accommodating to me allowing me to go to different cities during my workdays, because of my officiating. Other referees in Iran have first job and their second job is officiating. And a lot of them, their workplaces aren’t flexible to them.

A.F:  I watch  Highlights of the games. And spending time with family and kids. And if there is time left, working on “Laws of the Game” book translation.

A.F:   “Laws of the game” Book is by FIFA and is translated in many languages including French/Spanish/English. Each country can translate and use for their own use. And it gets updated with new changes by FIFA.  Danial Moradi in Iran, and I translate this Rule book into Farsi, for 4 years now. And the new version includes rules surrounding VAR Technology. And its distributed in Iran.

A.F: I can only officiate where I live. I don’t dream of something that is not realistic. There has been instances that Asian referees tried to officiate in CONMEBOL Qualifying games. But my dream is FIFA World Cup Final, which last time, in 2018 we came so close to attaining it. (Faghani officiated 3rd-place match:Belgium-England)

A.F:  Oh I think Mr.Alipour meant Refereeing sessions of Queensland area. Not the whole A-league. In A-league, Im a student. At Queensland, yes. I do provide my insights to other refs about “Game management” and “Positioning of ref during the match. “

A.F:   I think VAR gave me confidence. That once in a year, you have a chance to correct your decision. If it confirms ref’s decision, that’s good. If it corrects referee’s decision, its beneficial. Because its much better than referee incorrectly changing the outcome of the game.

A.F:   Iran football Federation has a limited list of referees they can introduce to Asia; Men referees, women referees, Assistant referees. Then there is competition between referees about that. There is an English test, physical test. Because I was among top league officials, and candidate of World Cup too, I was introduced to AFC. And when I moved to Australia, I talked to Taj(IFF President), that my situation is like Iranian legionnaire players. Players play for their clubs outside Iran, and  whenever there is National team games they come for the games. My situation is the same. I officiate in A-League but represent my country. In 2 months time, IFF has to introduce a new list and Taj and I would need to talk again.

Thank you for your time, Mr.Faghani. It was a pleasure talking to you. As football fans, we are very proud of you.